Let’s say you have bought yourself a brand-new car, and your garage seems to have no extra space. You might wonder what you can do about it, right? There are a few options.

You may choose to leave the car outside, but that won’t be a convenient thing to do. Using a car lift is the right solution to go for. You can fit a car lift in your garage and make extra spaces. Today we will talk about car lifts and the reasons they are so popular.

What is a car lift? Car lifts help raise a car from the ground allowing more undercarriage access. With the help of a car lift, one can utilize his garage’s unused vertical space so that one or two extra vehicles can be parked.

If you have a one or two-car garage, the car lift will make extra space for another car you want to own. That’s a better choice compared to keeping your vehicle outdoors.

Since the car lifts are designed to hold heavy weight loads, you won’t have to worry about your car’s falling flat on the ground. They are easy to install and cost efficient; that’s why car lifts have grown much popularities in recent years.

There are so many other benefits that come along as well, which we will discuss later in this article.

When Was The Car Lift Invented?

There are many debates regarding the time of the invention of car lifts. However, in 1925, the first car lift was patented by a person named Peter Lunati. He designed and built his own hydraulic car lift.

During the 1900s, the necessities for a car lift grew significantly. As more and more people went to car repair shops, the shop owners had to dig holes to make space for the vehicles. The process was costly. The car lifts have served as a far better alternative since then.

What Problems Does A Car Lift Solve?

As most houses come with small garages, people run into troubles if they own more than two cars. And car lifts solve that problem.

As a result, people don’t have to have another garage to keep their cars. Apart from that, the car lifts can bear significant loads efficiently. Therefore, you won’t have to worry about any scratches or damage to your vehicles.

What Are The Different Types Of Car Lifts?

There are various types of car lifts. You need to know what kind of car lift you may need for your shop or garage depending on your particular situation.

The 2 post lifts are among the most common automotive lifts. They are just the perfect size lifts for smaller vehicles. Anything from a minivan to a minitruck can fit easily in these lifts.

They come in two different types:

The symmetrical lifts are equipped with four arms of similar length facing each other. They position a vehicle front-to-rear in bay. As a result, the loads are equalized on columns, carriage and bearings.

The asymmetrical lifts have rotated columns and the front and rear arms are different in length. They position your car slightly back of the lift, allowing door opening and easy interior access.

The 4 post lifts have the widest range of clientele because they are suitable for both light and heavy vehicle lifts. With four posts at each corner, they form a rectangular base shape.

They are pretty stable compared to other lifts available in the market and are great for remote parking. Because they have more columns, they can facilitate significantly more weight than their two-post counterparts.

The portable lifts come equipped with a hydraulic lift mechanism. For remote workers going to several workstations, this is the perfect one.

The mechanism is hand-operated with a pump-like device. The electrically powered hydraulic systems can run while plugged into the car battery.

If you want to make sure all your wheels are correctly aligned on the right angles, this is the one to choose. These are pretty similar to the four-post lifts with the same structural designs. They also come in various weight limits capable of lifting both small cars and large trucks.

The open front models are generally preferable for focusing on the hood of automobiles. Make sure you buy the one with the proper maximum heights. Since the measurements vary in different models, not choosing the right one may create problems.

Parking lifts usually maximize space by applying a vertical parking pattern over a platform. The system is far more space-allowing compared to other conventional allocations that can accommodate few cars on top.

The parking lifts are only for parking purposes. They are not the right ones if you’re looking for maintenance and repair works. The lifting platform used here is generally supported by a single or two posts so that another vehicle can be parked beneath it.

How Tall Is A Car Lift?

The length of a car lift varies. Usually, the two-post and four-post lifts require a ceiling that’s higher than 11-12 feet. There are also low-rise lifts that may come in handy if you don’t have a higher ceiling garage.

Is A Car Lift Worth it?

Frankly speaking, buying a car lift for home garage can be extremely helpful if you want to keep an extra car for yourself in a safe position. Since putting your car outside has some risks like vandalism, heat due to the sun, etc., car lifts allow safety in this regard. You can turn your one-car or two-car garage into a multiple-car garage easily.

Can A Car Lift Be Installed Outside?

This question comes around as a common one. Truth be told, you can install it outside. But it’s not a good option. Lifts are mainly made for indoor use so that they remain in a temperature-controlled environment.

There are many lifts that, if installed outside, may void the warranty issue. It’s because, at any given moment, a natural weather disaster might cause severe damage to the lift.

Which Car Lift to Buy?

Numerous options are available while buying a car lift. The question is, why do you need it.

It might be for home garages where a two post lift, four post lift, or a portable lift will be good fit. For automotive repair shops, there are alignment lifts, scissor lifts, etc., available.

Check out car lift buying guides across the internet. You should research depending on the type of car you use or your purposes for purchasing the lifts.

More articles for you 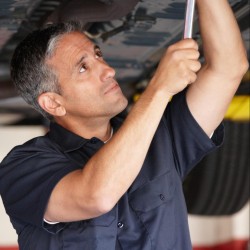 Frederick James is an expert mechanic with years of experience under his belt. He excels in diagnosing, troubleshooting, repairing, and modifying everything related to automobiles including but not limited to cars and pickup trucks. Read more...